James Gill came into the world far too early, 128 days early, with a wailing battle cry as powerful as his one pound, six ounce, 12-and-a-half inch body could muster.

He shocked everyone, especially the doctors who had never seen a baby born after only 22 weeks in the womb survive. That’s because it was 30 years ago: May 20, 1987. That day, James became the world’s most premature baby. It appears in the 1989 Guinness Book of World Records. James has the book, and a collection of impossibly tiny bonnets and booties his mother saved from his days in the Neonatal Intensive Care Unit. They look like doll clothes.

“I owe my life to them,” James says simply. “My parents especially and the doctors, nurses and staff all fought to save me…,” his voice trails off. “CHEO is such a wonderful place for both parents and kids.” 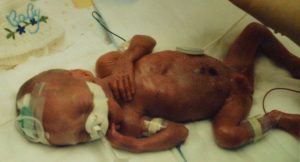 His father Jim raced behind the ambulance carrying his mother Brenda from their home town of Brockville to the Civic Hospital in Ottawa. Doctors there determined she was in premature labour. The medical team greeted them with grim news: their baby would not survive. James proved them wrong.
Most parents wistfully imagine their baby’s development with the help of grainy ultrasound images and a growing baby bump. Jim and Brenda watched James develop through the window of his incubator. His ears, hands and feet were not fully formed; his eyes were fused shut. James’ parents advocated for him while the medical team went into uncharted territory. The team came up with creative solutions to care for James. A catheter bag filled with saline created a tiny water-bed to gently cradle his soft, still-developing skull. His skin was so delicate it would tear with the removal of the gentlest medical tape; calls were made to other hospitals to get advice on how to protect it and promote healing.

“I owe my life to them,” James says simply. “My parents especially and the doctors, nurses and staff all fought to save me…,” his voice trails off. “CHEO is such a wonderful place for both parents and kids.”

James also needed heart surgery. During his 128 days in hospital, world renowned cardiac surgeon Dr. Wilbert Keon performed the procedure to close one of his tiny heart valves. At the time of the surgery James weighed just one pound.

“Max was a great guy. He had a very personal connection to our family my whole life. He arranged for me to be taken home from the hospital in a limousine,” James recalls, smiling. Max stayed in contact with the Gills, even visiting James’ mother in hospital when she was fighting cancer. He spoke at Brenda’s funeral service when she passed away in 2006.

James is making good use of the life he fought so hard for. He is grateful for his tight-knit family and a career in the automotive industry, recently joining Barrhaven Mazda as Service Manager. His message is simple. “I’m here – and I may not know yet why, but I’m fortunate for everything that’s happened in my life. If anything, maybe I can offer hope to families going through the same thing. I’m living proof. My parents and CHEO helped me beat the odds!”